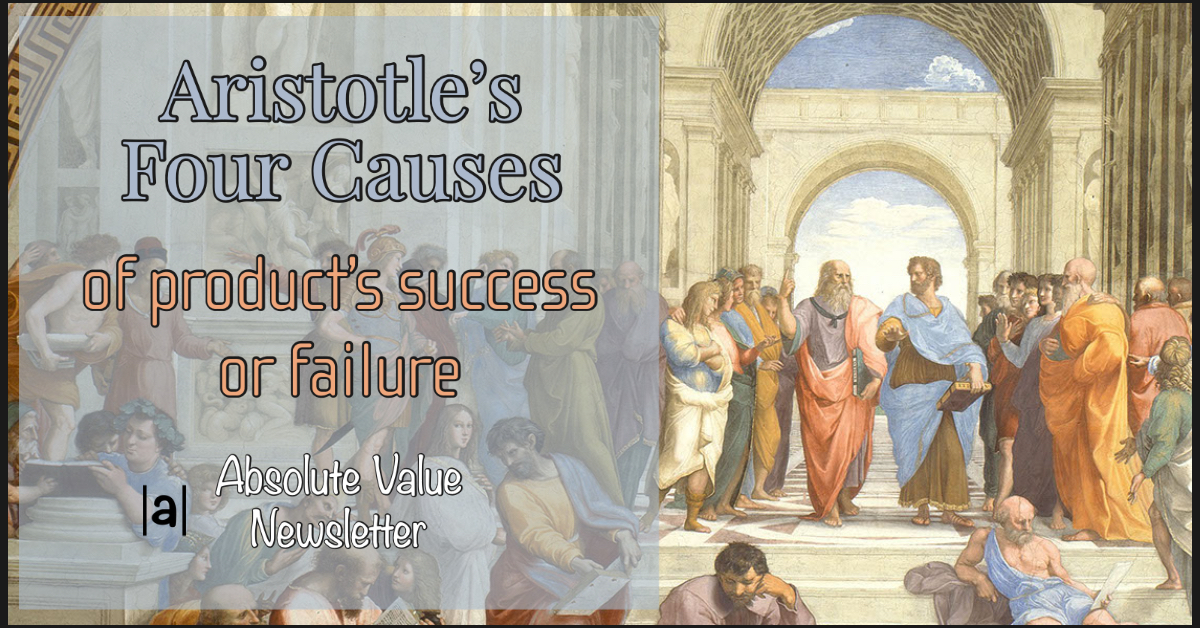 After a relaxing holiday, the new season of my newsletter begins! Let’s kick it off with a fundamental question: How to come up with a product development strategy that is clear, consistent, and reconciles rather than divides the efforts of different disciplines?

Why is this even so difficult? Some food for thought comes from a pretty unexpected time and place: Ancient Greece. Yes, I’m talking about Aristotle and his concept of the Four Causes. And don’t worry if you’re not fond of ancient philosophy. Things will quickly get modern very quickly.

So, Aristotle argued that to really understand a phenomenon, you need to know why it comes into existence, why it exists. And to understand that, one needs to study it from four different angles to grasp the Four Causes: Material, Formal, Efficient, and last but not least – Final Cause.

But what about producing new phenomena? That’s what we are after as visionaries and innovators, right? Aristoteles was primarily interested in analysis (taking unknown things apart). Still, we can also turn his claim around: to create a new phenomenon, you need to define some core aspects: what it’s made of, what it will look like, what forces will drive and support it, and what impact it will make. The critical difference, though, is that if the Causes of existing phenomena comprise knowledge, while what we define for yet-to-be phenomena is primarily assumptions.

Let’s now look at an example. Think about a house; houses are complex things. To really understand what makes this house a rightful part of this world, or perhaps how to build a similar one, you need to know a lot about it. The list is really long, but there are four essential kinds of knowledge:

Notably, these kinds of knowledge tend to hinge upon each other: there are many obvious and hidden connections between their elements.

Even if you have never heard of the Four Causes, this distinction probably sounds very familiar, and that’s not surprising. Through the scientific renaissance and two revolutions: scientific and industrial, 2400 years later, we inherited many traits of Aristotle’s thinking. Later, when the idea of the division of labour came about, no surprise that common areas of personal or even departmental specialisation happened to almost always be subsets of only one or two causes – also known as siloing.

Many companies operate in a silo mentality. And it works well when you’re in the business of routinely reproducing the same well-understood phenomenon with clearly defined causes. Nowadays, this never lasts long. Regardless of how successful companies would love to keep things as they are, the market change invalidates the Causes, and that’s where the “innovate or perish” choice kicks in. To innovate, they need to “break the silos” – a notoriously tricky thing to do. Yet, many other companies seek to develop and launch new products from scratch and are in a position to avoid this trap. Ensuring that Four Causes and their interconnections are proportionately addressed in the strategy’s initial and subsequent revisions is a significant step toward success.

Of course, this leaves many open questions like the ones below. Hit Reply and let me know which ones I should cover in subsequent newsletters first.


Hi! I'm Mike Kotsur, a software consultant deeply passionate about technology and innovation. During the last decade I've helped many startups, innovation labs and product incubators to validate and develop business ideas from scratch into well-founded software systems valued by users and customers.

I can help you with your next innovative software project!

Schedule a free video call to discus a project, follow me on LinkedIn or subscibe to my bi-weekly newsletter to stay in touch.